It lies within the Detroit Mining District, approximately 290km southwest of Salt Lake City and contains numerous historical copper, gold and manganese mines. Past mining dates back to the 1870s and historical reports indicate production of around 120,000 ounces of gold and 25,000t of manganese.

Alderan controls 24.7 square kilometers of tenement at Detroit through a series of option agreements with companies such as Tamra Mining LLC and Freeport McMoRan plus a number of local claim owners. The district has been explored for copper and gold in the past by major mining companies such as Anaconda Copper, Kennecott, Newmont, BHP and Freeport but no one company was able to build a contiguous land position to enable district-wide modern exploration. The United States Geological Survey (USGS) has also explored the area, sampling extensive gold mineralised jasperoids. 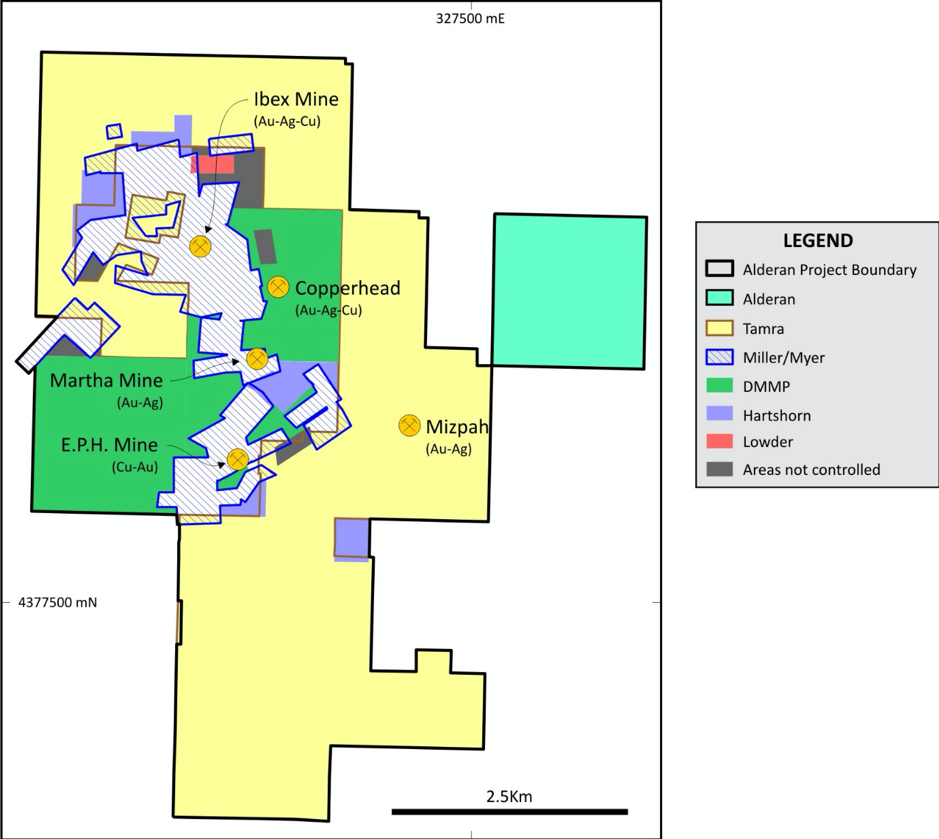 Detroit lies within the east-west trending Tintic igneous belt and Alderan believes that it has geological similarities to the Bingham copper-gold-molybdenum mining district further north in Utah and the Battle Mountain and Carlin gold and copper mining districts in the neighbouring state of Nevada both of which host a number of world ranked gold and copper mines.  Potential copper and gold deposit styles at Detroit include porphyry, distal disseminated, skarn, carbonate replacement and structurally controlled. 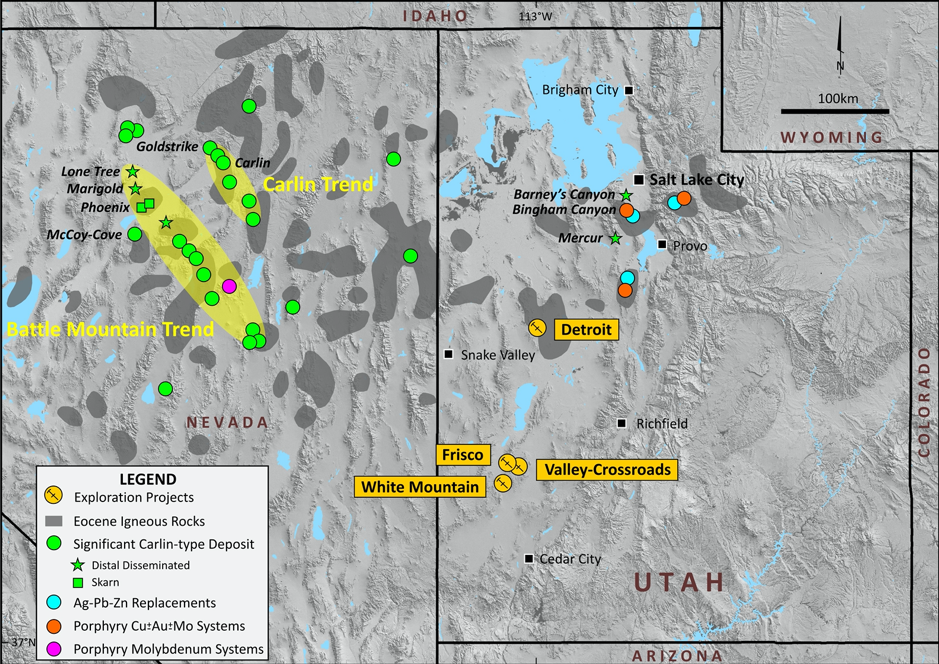 Detroit is associated with the Tintic Eocence igneous belt and has potential for mineral deposit styles which occur in the Bingham Belt and the Carlin and Battle Mountain trends in Utah and neighbouring Nevada. (Modified from: Johnson, C.L et al; Toward a Global Carlin-Type Exploration Model: The Relationship between Eocence Magmatism and Diverse Gold Rich deposits in the Great Basin, USA; Nov 2020) 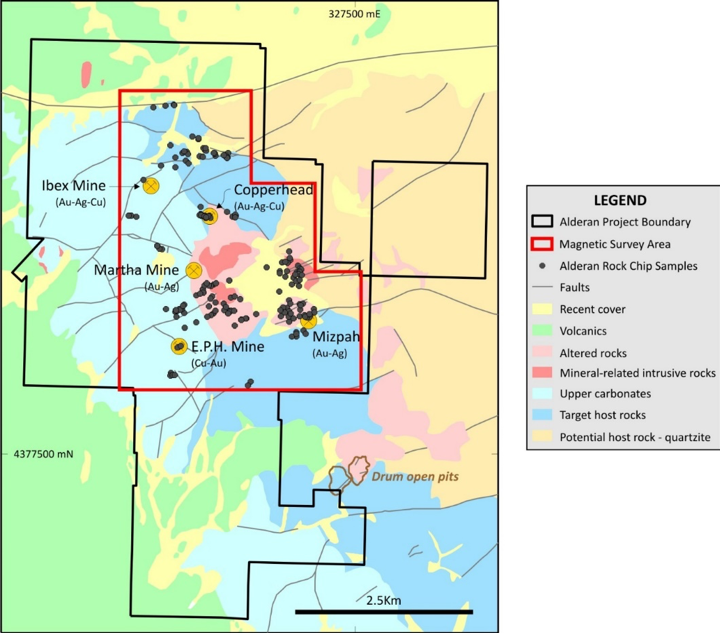 Prior to tenement consolidation, the Company also drilled seven diamond holes focussed in and around the Mizpah gold-silver prospect on Tamra joint venture ground. All holes intersected gold mineralisation with the best grades in hole DDM20-006 which intersected 7m grading 1.98g/t gold within a broad 83m intercept grading 0.41g/t gold. Mizpah received extensive historical exploration for a near surface oxide gold deposit with 197 drill holes completed in the mid 1980s. The average hole depth was less than 30m and 40 of the holes ended in highly anomalous mineralisation grading more than 0.5g/t gold and of these, 20 holes ended in +1g/t gold.

Historical exploration in the 1960s also delineated a thin low grade chalcocite copper deposit to the north of Mizpah on the eastern margin of the Basin Main magnetic anomaly.

Alderan’s exploration post consolidation has highlighted the potential of Detroit to host a copper-gold-molybdenum mineralised porphyry deposit plus skarn, intrusive and structure related copper and gold mineralisation on the margins of the porphyry. Bulk leach extraction gold (BLEG) stream sediment samples draining the Basin Porphyry, Copperhead and Mizpah prospects are highly anomalous in copper and gold and these results are supported by rock samples throughout the project area.  Of 197 rock samples collected by Alderan, 17 grade greater than 0.5% copper and 28 contain more than 1 g/t gold with maximum assays 3.2% copper and 9.1g/t gold.  These results are consistent with historical rock sample analyses which included samples of jasperoid collected by the USGS which graded up to 100g/t. 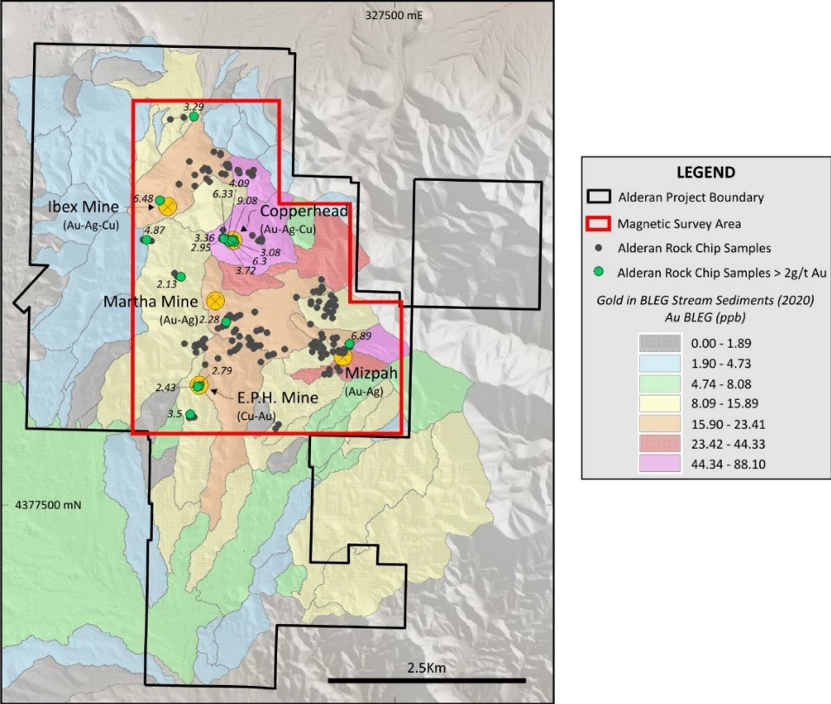 BLEG gold in stream catchments and +2g/t gold in rock samples at Detroit. 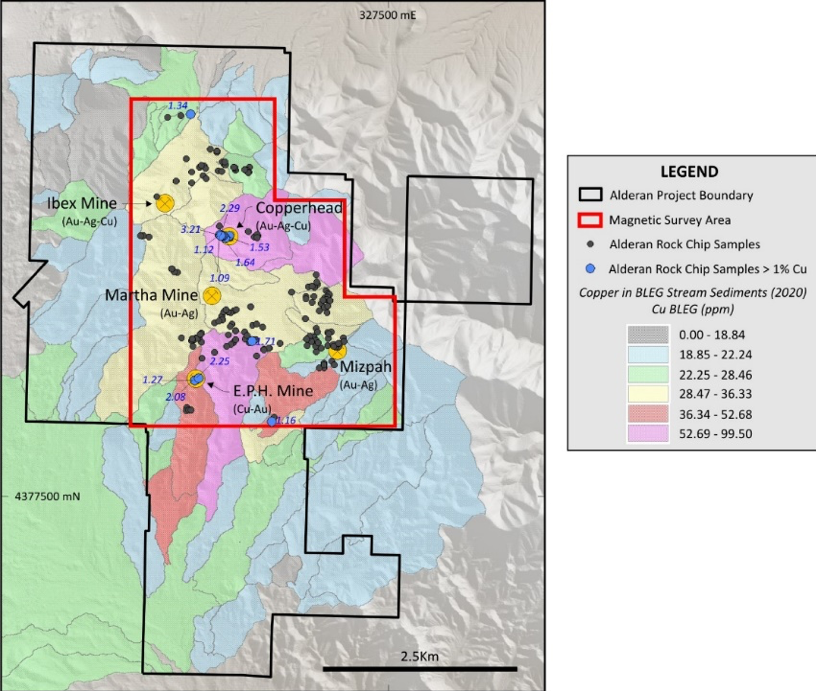 Following the stream and rock sampling, Alderan completed ground magnetic and induced polarisation (IP) geophysical surveys over the highest priority area. The ground magnetics identified anomalies likely to be caused by intrusives, associated skarns and structures and the IP highlighted chargeable zones which may be caused by sulphide mineralisation containing copper and gold.

The Basin Complex appears to have a classic porphyry magnetic signature with the central Basin Main anomaly interpreted to be the potassic zone surrounded by a low magnetic arc of phyllic alteration. The outer rim of magnetics is thought to be caused by variably altered intrusives and skarns. The Basin Main anomaly has dimensions of approximately 500m east-west by 300m north-south and has been modelled to a depth of over 500m. 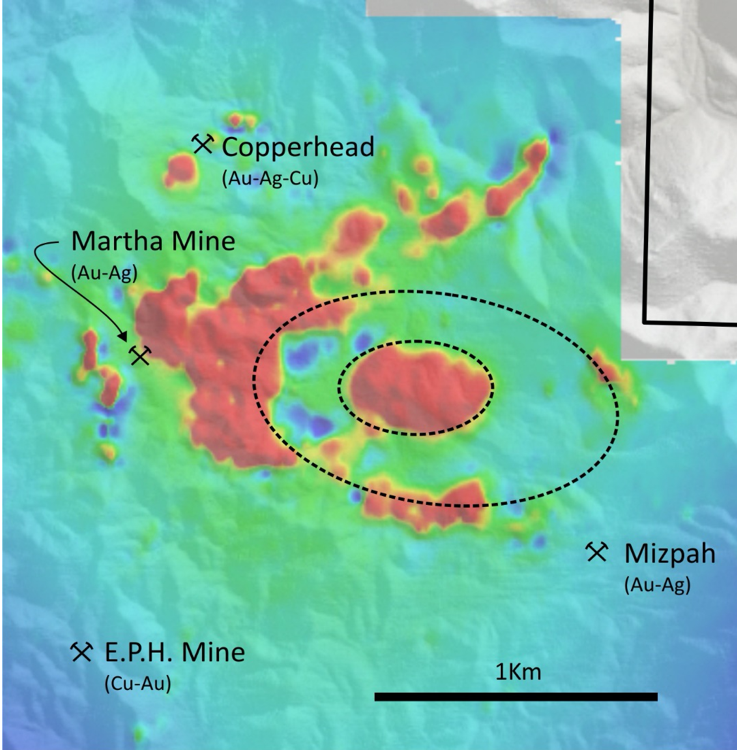 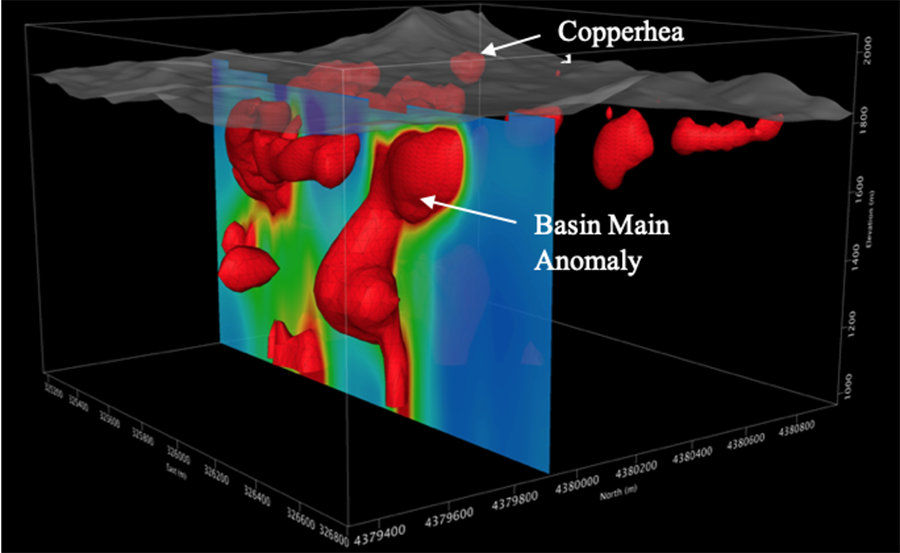 The magnetics and IP complement each other with a zone of high chargeability, likely to be caused by sulphide mineralisation, coincident with and wrapping around the Basin Main magnetic anomaly.

The magnetics and IP at Detroit have also identified anomalies outside the Basin Complex at Copperhead, the Northern Extension and the Southern Anomaly. 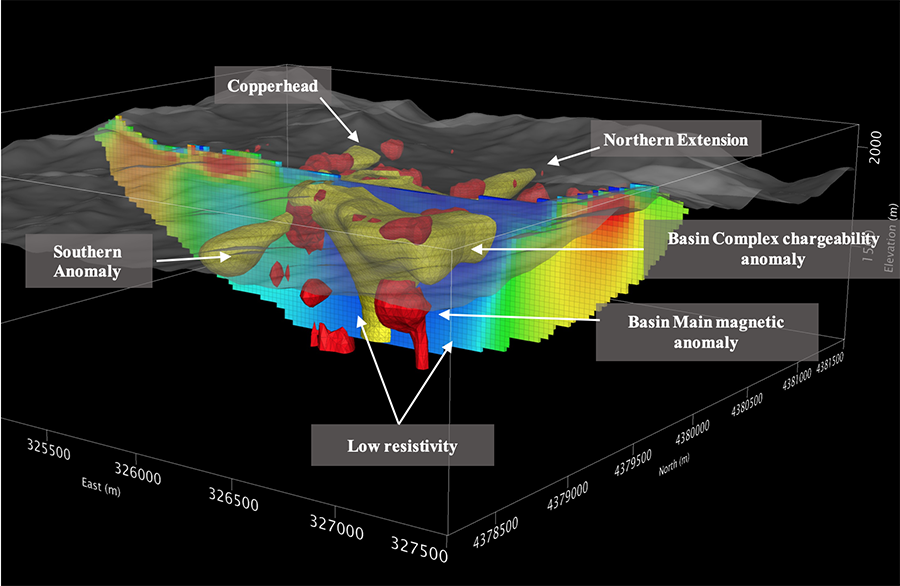